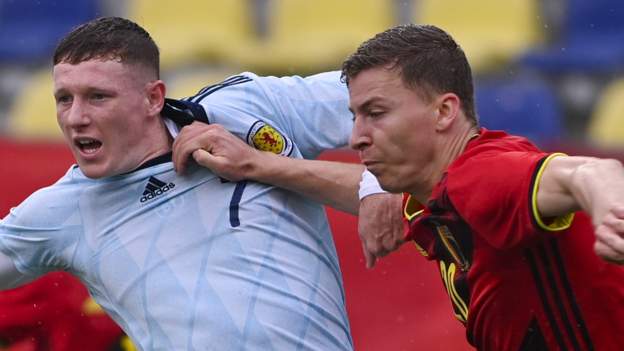 Scotland impressed as they held group winners Belgium to a draw in their penultimate European Under-21 Championship qualifier at Stayen.

Scot Gemmill’s side remain fourth behind Denmark and Turkey, but they will be encouraged by improved display in a disappointing campaign.

With Scotland cut off from some of their more established names, such as Rangers winger Glenn Middleton, Hibernian left-back Josh Doig and Aberdeen right-back Calvin Ramsay, there have been fears of what they would do against Belgium’s youngest production line. .

However, home head coach Jacky Mathijssen made seven changes from the side that drew 1-1 at Herning last time out – a result that secured a top spot thanks to their better head-to-head record over hosts Denmark.

And Scotland’s high press, combined with a pitch turned wet from a downpour, had the young Red Devils under pressure early on.

Aberdeen’s Anderson and Connor Barron impressed in midfield and both tested Genk goalkeeper Maarten Vandevoordt from about 18 yards after some clever footwork.

Guard center-half Lewis Mayo may have been lucky only to be yellow to transport Anthony Descotte back when the Belgian forward exploded.

Joint Charleroi striker Anass Zaroury proved to be the hosts’ biggest threat and his deception led to a battered drive a few feet above the crossbar and his speed to a shot into the side net.

Scotland, however, had the ball in the net before the break when Celtic center-half Stephen Welsh crashed home from close range only for the effort to be ruled out for Mayo’s climb over a defender in a lead down a corner.

Belgium improved after the break and yet another Charleroi forward, Nkuba Tshiend, sent a dip just over and Mayo was relieved to see Freiburg defender Hugo Siquet firing into the side net after a whimsical pass.

It looked like Scotland could only get their second win in seven group games when Barron’s good cross found Anderson charging at the back post, but the Newcastle man could only direct it wide from the near-vertical under pressure.

No victory, but Gemmill’s side will now host the Danes on Friday with renewed optimism after denying Belgium a fifth consecutive victory.