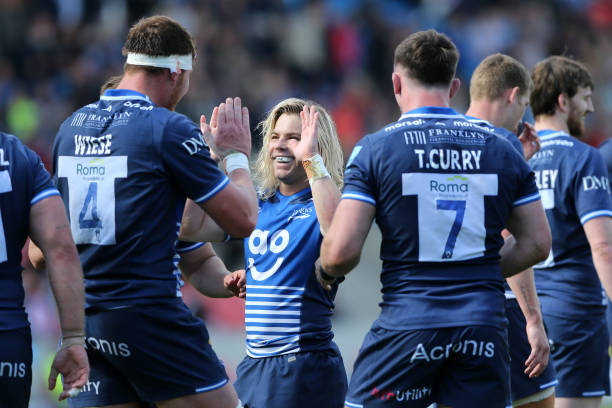 Faf de Klerk was among the Springboks who bid farewell to Sale Sharks as the Premiership and French Top 14 finals were confirmed on Saturday and Sunday.

Get your tickets to the show now ➡️ https://t.co/rP2dciXRll pic.twitter.com/Le5T0InvDE

Outgoing Springboxes Faf de Klerk, Rohan Janse van Rensburg and Lood of Jager all starred in their final appearance for the Sale Sharks in a 42-19 six-game win over the Bristol Bears.

Akker van der Merwe and Dan du Preez both won a test each for Sale, while a lock Cobus Wiese bagged a brace and a half fly Robert du Preez kicked four conversions. Jean-Luc du Preez and prop Coenie Oosthuizen was also in action for the Sharks, who finished the season in sixth place.

Northampton Saints secured their place in the semi-finals with a power to 65-26 10-try win over the Newcastle Falcons.

The Leicester Tigers went undefeated in the Premiership for the first time in 20 years with a 20-10 victory over Wasps.

Loose forward Jasper Wiese and Hanro Liebenberg started for Leicester. Wiese made 14 carries for 54 yards, hitting six defenders in the process, while he also made 13 tackles and earned a turnover.

Gloucester finished their season on high with a convincing 54-7 home win over Saracens, though it wasn’t enough to secure a semi-final spot.

Ruan Ackermann started at No 8 for Gloucester, making 56m from 16 carries, hitting four defenders and completing eight tackles. Ivan van Zyl was the only South African involved in a much altered Saracen costume.

Exeter Chiefs scored seven tries to finish their season in style with a win over Harelquins.

Tyrone Green made a try-scoring comeback from injury at defense for Harlequins, who will face Saracens in the semifinals. Andre Esterhuizen, Wilco Louw and Stephan Lewis also presented for Harlequins.

Jacques Vermeulen set out for Exeter.

Worcester Warriors jumped opponents Bath at the bottom of the table on the final day.

Duhan van der Merwe and François Venter started for Worcester, while sideways Jaco Coetzee and a lover Jacques du Toit was in action for Bath.

See you next week! pic.twitter.com/MSZq0Ypv9a

Fly half Tristan Tedder kicked two conversions and a penalty to help Perpignan finish the season strong with a 22-15 win over Bordeaux, who finished in third place and will host Racing 92 in the first round of finals.

Montpellier finished the season in second after being beaten 20-15 by Clermont, who narrowly missed the play-offs, on the final day. John Serfontein and side Nico Janse van Rensburg began for Montpellier, while prop Robert Rodgers and Bok half fly Handre Pollard came from the bench. Montpellier will host the winner of the Bordeaux vs Racing 92 final in the semi-final.

Fresh from winning the Champions Cup, La Rochelle confirmed their place in the first round of play-offs claiming a 29-26 victory over Lyon. Raymond Rhule and Wiaan Liebenberg both started for La Rochelle, who were without Dillyn Leyds due to injury. La Rochelle will travel to Toulouse in the qualifier.

Brive finished their campaign in 12th place thanks to a 33-17 win away to Stade Francais, which finished in 11th place. Former Cheetahs Center Nico Lee started for Brive, while scrumhalf James Hall started for Stade.

Toulouse set up a revenge collision from last season’s final with Racing 92 in the play-offs after crushing a relegated Biarritz 80-7 in a 12-try blitz. Joe Jonas was on the defensive for Biarritz, who will play in the Pro D2 next season.