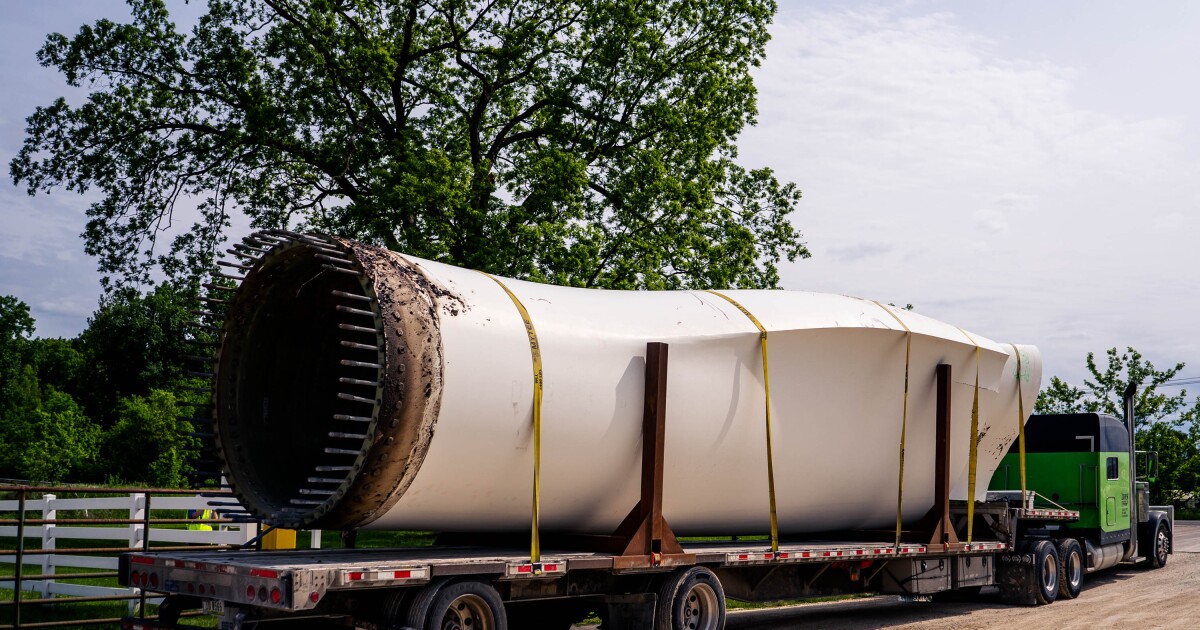 In the small community of Louisiana, Missouri, it is not uncommon to see what look like massive white wings traveling along the road, tied to flatbed tractor trailers.

Once a bustling trading port, the historic city of the Mississippi River 90 miles north of St. Louis has become a hub for unusual merchandise: used wind turbine blades. Shipments from almost every corner of the United States arrive daily at the Veolia North America recycling plant, the last stop for turbine blades at the end of its life.

As she stood in the plant’s gravel parking lot Monday, Rose Collard pointed to two sections of a 150-foot turbine blade from Massena, Iowa, weighing a combined 20,000 pounds. “This is one of the biggest blades we get,” said Collard, an environmental health and safety specialist at the recycling facility.

The U.S. wind power industry has grown at a record rate in recent years, with dozens of new projects emerging across the country. Missouri, Illinois, and Iowa were responsible for a a large part of that growth in 2020, ranking among the states with the highest new wind energy capacity. But this thriving industry now faces a challenge: what to do with old wind turbine blades when it’s time to replace them.

Although most turbine blades are designed to last at least 20 years, some are discarded much earlier, said wind technology engineer Derek Berry.

“Some are catastrophically damaged by things like lightning,” said Berry, who is based at the National Renewable Energy Laboratory in Colorado. “Or you may have a large wind turbine that was built 10 or 15 years ago and a company wants to get rid of the older, shorter blades and build longer blades that produce more energy.”

Researchers estimate 43 million tons of wind turbine blades will be discarded worldwide by 2050, weighing even about 1,000 individual St. Louis Arches.

Wind power is a more sustainable and economical alternative to fossil fuels. Once a wind turbine is demolished, about 85% of it can be recycled or reusedincluding copper wire, steel and electronics.

But turbine blades can be difficult to recycle. Unlike an aluminum can or a glass bottle, the blades are often made of fiberglass, steel, wood and resin – components that are difficult to order during processing. Their gigantic size can also present a logistical challenge, said Robert Cappadona, president and CEO of Environmental Solutions and Services Group of Veolia.

“A lot of these wind farms are in remote places,” Cappadona said. “If you have a 291-foot-long blade and you have to move it 1,000 miles, what’s the best way to move it?”

Two years ago, employees of GE’s Renewable Energy division called Cappadona, asking if he knew how to recycle old wind turbine blades. Although Veolia recycles a wide range of items, including computer electronics and fluorescent lamps, this was a new challenge.

“We said, ‘Send us a five-gallon can of windmill blades,'” Cappadona said. “We wanted to destroy them chemically to see what made up a blade. We found that more than 70% of the blade was silica, which is used to make cement. ”

Only a few months later, the small recycling plant in Louisiana, which had previously processed medical waste, began receiving its first shipments of wind turbine blades.

Inside its cavernous warehouse, a series of chip machines grind up the blades into saw-like material, which is then sent to another machine that sorts it by type. A dense haze of silica dust hangs in the air inside the warehouse, held at bay by industrial air filtering equipment.

“If you imagined shaving the entire bark of the tree, it’s about the consistency of the wind blade material,” Collard said.

About 60 to 80 tons of pulverized blades are loaded into dump trucks and shipped from the factory daily to cement producers across the country. About three-quarters of the blade material will be used as raw material to make cement, while the factories use the rest as fuel, replacing coal.

The plant has shredded nearly 2,000 blades since August 2020, and an additional 250 blades are being processed monthly, Collard said.

GE, one of the largest wind turbine suppliers in the world, is a partner in Veolia’s recycling program. The company now sends the “vast majority” of its used blades to the Louisiana plant, said Michelle Simpson, leader of GE Renewable Energy Digital Services.

Few U.S. recycling facilities are equipped to handle the material, which means GE has to ship used turbine blades hundreds or thousands of miles away.

“It’s a real balancing act,” Simpson said. “You’re now releasing carbon dioxide to transport these blades, so are you still getting the environmental benefit you want by not dumping them?”

But because the crushed blades can be used to replace crude silica in cement production – and reduce the amount of coal used to burn plants – there is still a net benefit to recycling the blades, Simpson said.

Efforts to recycle or reuse old turbine blades are likely to become increasingly important in the coming years, said Berry, the wind technology engineer. “A lot of wind turbines have been built in the last 20 or 25 years, so we see a near future where quite a few of those blades will sink.”

Wind energy researchers worldwide are working to develop sustainable and cost-effective ways to recycle wind turbine blades, but they are also redesigning them using different materials that can be recycled more easily.

French chemical manufacturer Arkema has developed a new form of thermoplastic resinfor example, this can be melted down during the recycling process.

“At the same time as we are addressing the challenge posed by blades coming out of towers now, we are also changing our approach to the design and manufacture of wind turbine blades in the future to provide us with more options for recycling and reusing blades at the end of his life, “Berry said.” We want to make sure we make our lives easier in the future. ”