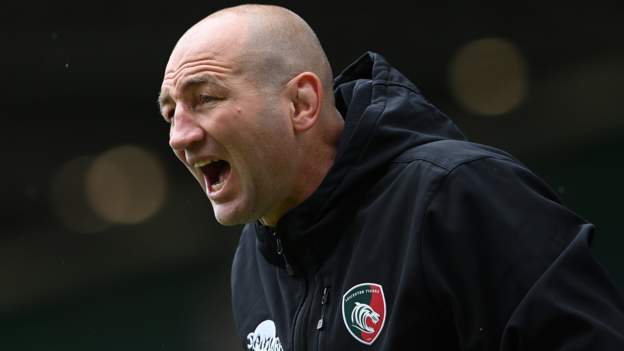 Leicester edged Wasp to finish top of the Premiership for the first time since 2011 and set up a play-off semi-final against rivals Northampton.

Guy Porter’s early score and George Ford’s conversion were the only points of the first half at Welford Road.

Will Porter finished a quick break when Wasps hit back, but an additional Ford penalty sealed a 20-10 victory.

Leicester, who have won every home league game this season, will host East Midlands rivals Northampton in the play-offs next Saturday after the Saints reached fourth place.

Wasps will have to settle for a place in the European Challenge Cup next season after a ninth-place finish.

Tigers have led the standings since the early weeks of the campaign and finished seven points ahead of Saracens who started the day three points back but launched a weakened side and were beaten at Gloucester.

The home side started with real intent and crossed after just three minutes when Ford fed Porter who attacked the line quickly and broke through two tackles to waltz in under the posts.

But any thoughts the floodgates would open have been dashed by a Wasp side looking for points to sneak into the top eight and secure a place in the Champions Cup qualifier for next season.

Defenses took control of a huge physical struggle for territory, forcing errors that became endemic in a messy first half due to the opening round of the season rather than the regular season finale.

Both sides created a line break and half-chances, but lacked accuracy, with Ford emphasizing an error-scattered first half as he scraped a penalty wide of the posts just before the break.

A scoreless 46 minutes were broken as continued pressure earned Wasp a penalty that was cracked by Gopperth, making his 156th and final appearance against the team he will join next season.

Tigers almost endured a rise to their own line while the visitors continued to press for a score, but again, both sides exchanged errors and turnovers as soon as opportunities signaled.

Matias Moroni was brilliantly held up over the line by Wasps fly-half Charlie Atkinson and from the ensuing play, the hosts worked overlapping for Steward to dive over in the corner.

With renewed confidence, the Tigers looked to have turned the corner, but a quick break and good downloads allowed Porter to point down seven minutes after coming in and reduce the deficit to 17-10.

A second Ford penalty eased any nerves as Leicester finished the regular season with a perfect home record of 12 wins for the first time since 2001-02.

However, head coach Steve Borthwick will know his side will need much improved performance if they are to reach Twickenham on 18 June.

“Clearly with the execution we want to be better, but by the nature of the contest it was a great contest.

“I thought there were some positive elements, but it was awkward overall. I think we missed opportunities, but I think both teams struggled with that downpour before it started.

“We made too many mistakes with the ball. Too many clever mistakes you wouldn’t expect and that was the thing.

“There were some positives around the kick game and some things we definitely needed to fix. We get a field position but what we do with the ball was kick it back and not take advantage of that.”