me recently returned from a walk in Hyde park, headphones in, Max Richter playing, after a stifling 30C day in London. I stopped halfway to take off my trainers and step on my feet on the grass. Here I often go when I need to breathe, and not think.

I have been a nature nerd since the days of making mud cakes (and grass on the side), turning stones to see worms and pieces of wood, and foraging for blackberries with the other children in the village, often to make something inedible. fruit soup.

When I think about this special time in my childhood, I feel a visceral pull, as if I’m missing someone. I found out, at the age of five, we were moving out of town in the middle of rural Herefordshire, somewhere on the border of Wales and England. I remember I hated the idea. But it was ultimately the best thing that ever happened to me.

Nature is not just a beautiful landscape. We are nature – and we depend on it

My background has been described many times as “humble,” and so it was. I often escaped from my house because of the calm of the green around it. My friend Niall and I walked for hours, hoping to get lost, and with buses rarely appearing we ended up getting to know shortcuts through every field and hedge. The way Kerry and Kurtan often circle in a field [the BBC comedy] This Country rings with me.

Although I don’t come from a “privileged” education, knowing the landscape so well has given me a relationship that is a kind of wealth. From a young age, I knew instinctively that my fate on this planet is inextricably intertwined with that of nature – with the fate of flora and fauna and fungi.

I felt it in my bones, and certainly the era of the “tree hug” or “eco-warrior” is now gone because we are all in this ecological mess together, whether we feel a connection to nature or not. We are 100% dependent on these incredible natural systems provided in this biosphere. We know that for clean water, healthy forests are needed; to balance carbon, you need healthy seas and peat bogs, mangroves and seagrass. Nature is not just a beautiful landscape. Ni is nature – and we depend on it.

It seemed natural to me to start talking about the destruction of nature and, more generally, about my fears and hopes about this wonderful planet: asking questions, holding people accountable, trying to open the conversation. I gave the crisis a name loudly – the climate and natural crisis – as many others did, but no one in my industry talked about it. The biggest threat to humanity … and it was as usual! It was completely bizarre.

I just wanted it to be the titles as it always should be. Now, we’re in a pretty awful place.

I realized that everything I said that had to do with nature or climate had consequences for me. Apparently saying out loud that I was afraid for our future was a big deal. A plea for us to preserve intact forests, for example, was treated as if I had made a huge political statement, and I began to remove followers on social media, quickly. To really engage young people (rather than scare them), I had to shift the story from panic and anger to ambition and optimism. Despair was leading me nowhere. My followers have been up again lately. Considering I haven’t released music in a long time, maybe something is catching on!

In 2017, I became an half ambassador for UN, meaning I had to go into scary conferences and make speeches to scientists and global leaders. Terrible. Like someone with a phobia of public speaking and chronic cheating syndrome, this was not a fun process.

If I didn’t have such a strong connection with nature, I don’t think I would be able to do it. My passion also comes from how it saved me and was there for me when poor mental health was leading me to a dark place. That alone has given me some legitimacy to speak out and muscle my way into discussions, mostly between politicians who decide our future and the future of our children.

I traveled with the WWF (since then I have become a WWF ambassador) to the Jakobshavn glacier of Greenland. Witnessing the sheer size and size of the glaciers and hearing the ice crack was a huge sensory overload and set me up over the climate crisis.

Basically, what we do to the planet is the equivalent of directing a dryer to an ice cube that sits in hot water. But such analogies do not seem to wash with people. As a songwriter and performer, I trade in emotion and feeling, so I get that. Telling stories is everything; how we connect, intertwine, relate, empathize.

I was lucky enough to meet the scientists – who have only the science and the data and nothing more, no metaphors or puns, just facts – and I really felt their indignation. They are in the front line, providing evidence to our politicians who are then trying to negotiate with it, instead of actually acting.

My tactic now is to appear as often as possible armed with messages from scientists, and opinions and questions accumulated by people who follow me on social media. I am always aware of who is not in the room as well as who is. For us natural nerds, things are finally changing for the better. The official climate process has stopped treating nature and climate as two different problems.

I am so relieved to see that a resurgence is back on the radar. Nature can really heal itself – if we let it

At Cop26 in Glasgow last year, I started talking, and met a network of incredible environment ministers from all over the world, from Kenya, Costa Rica and Ecuador, who are reversing the tide of destruction, sometimes in very dangerous circumstances. They sustain nature in a way we have not seen before. The Canadian Minister of the Environment, Steven Guilbeault, was in and out of prison for eco-activism. Aminda ulo! I’m not saying this is happening everywhere, but we shouldn’t eliminate committed, talented political people who can overturn the system of ensuring the destruction of the natural world while protecting it.

As uncomfortable as I am, that is nothing compared to the risks that are taken by indigenous communities who do most of the work and take most of the risk. Whenever I go to a summit or conference, I try to reach young activists from all over the world. At Stockholm + 50, I met young leaders on climate and environment who escaped war zones and persecutions to reach these meetings. They included people from rainforest areas who traveled for days – including a canoe – only to be heard. That level of risk and sacrifice is amazing.

These are my heroes and allies. They are the people I want to represent myself. It breaks my heart to think that young people, a demographic that includes my one-year-old son, could grow up without such a connection to the nature I was fortunate to have. It’s because I’m so relieved to see that resurgence is back on the radar. The idea that we can reverse biodiversity loss, provide the ecological functions we all rely on, and create resilient local economies for ourselves and our children – just leaving everything to its natural course at times – is pretty cool.

Nature can really heal itself if we let it. At the same time, if we are truly committed to immersing ourselves in it, it can do wonders for mental health.

I would tell anyone that, in support of Global Witness, WWF, Unep and ambitious goals for to resurrect Europe by 2030 and protecting 30% at least from the seasis you-formed hole in ecological activity. It’s not separate from you, it’s part of you. You really have a lot more power than you think, and there’s no better time to capture it.

Be aware of your daily actions as you can be as friendly as possible to Earth. Talk to your friends, create groups, join local environmental communities, plan walks in nature, get caught up. But, above all, stay in active hope.

There are still so many we can turn to. We just need to keep fighting, and sustain this incredible planet we call home. 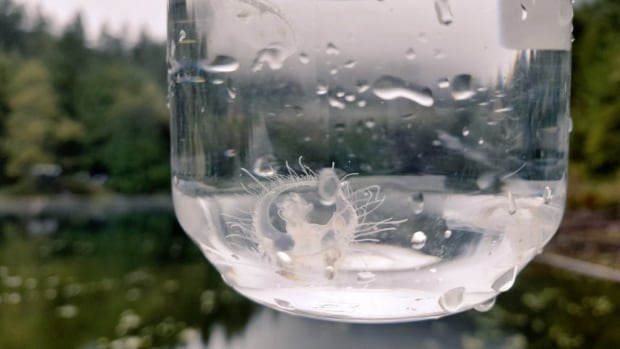 These invasive jellyfish are the size of a thumbnail – and they make a new home in BC.