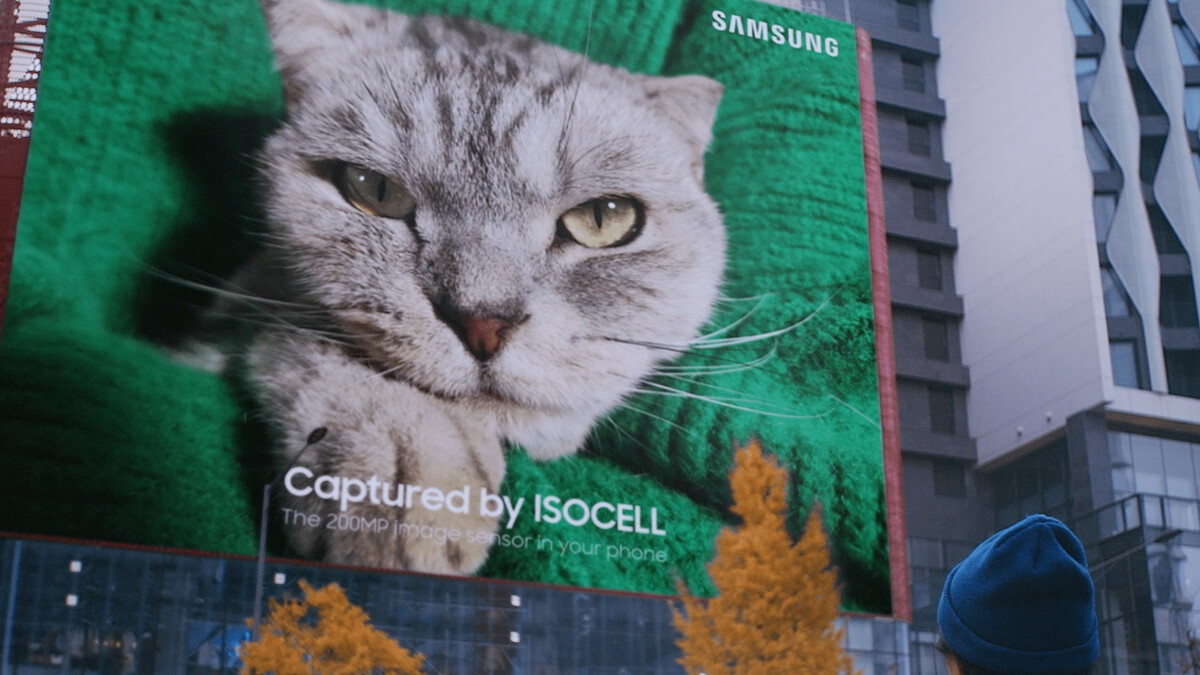 The ISOCELL HP1 is a 200 MP image sensor that will debut next month on the Motorola Edge 30 Ultra.

About a week ago Samsung released a video revealing what ISOCELL HP1 is capable of. The 83-second clip was watched 3.2 million times. Moreover, Samsung wants you to know that “The imaged mobile phone and user interface are fictitious creations. No simulation of any actual products is intended.” In other words, the phones and the operating system you see in the video are not real and do not represent any Samsung device or software current or upcoming.
According to SamsungThe synopsis of the story behind the video is that “the sensor engineers at Samsung Electronics have accepted a high challenge. They are trying to print an image that was taken by ISOCELL’s 200-megapixel (MP) mobile image sensor on a huge canvas. 22 feet tall (the photo was taken with a test board). That’s one and a half times the size of an official NBA court.
In the heart of the city, the canvas is unfolded showing the amazing image of the cat with the iconic Samsung logo in the upper right corner, and below you can see the words “Captured by ISOCELL.” So how exactly did this challenge come about? Minhyuk Lee, an engineer on the Sensor Solutions Team at Samsung’s LSI Business System, explained, “I’ve always wondered how big you could make when it comes to printing a 200MP image.”

Lee went on to add that “as exciting as it was, the challenge was demanding, as this was our first time showing the quality of an image sensor that had not yet been adopted in smartphones.” The team notes, “Choosing a cat as our subject was a difficult decision. It gave us many obstacles to overcome, such as capturing such an active subject with a test board. However, the team concluded that the subject should be something that would show a high level of detail. and that was a popular photography theme at the same time. “

Weighing with his opinion, photographer Hyunjoong Kim said, “I couldn’t believe my eyes when I saw the raw image magnified to 100%. I was really amazed at the degree of detail. At that moment, I knew any prejudices I had. “Smart phone photography has been proven wrong before.” The canvas consisted of 12 separate pieces of fabric each weighing 2.3 meters long pieces of fabric (about 7-and-a-half feet each) that were sewn back together.

The image of the cat was transported by truck and a crane was used when it came time to unfold the photo on the side of a building. After the task was completed, the Samsung project manager noted, “When the image was deployed for the big reveal, the true enormity of it really struck me, and not just because of its actual size. The moment I witnessed the 200 million pixels presenting the wonderful detail of the cat’s eyes and fur, I was overwhelmed by all the effort that went into developing this final product. “

And if all goes well, consumers will get their first shot using a camera backed by Samsung’s 200MP sensor when the Motorola Edge 30 Ultra is released next month.