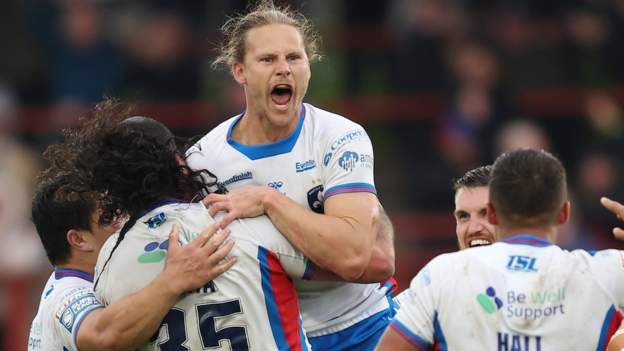 Trinity needed a second-half counterattack to take it to overtime, with scores from Corey Hall and Lee Gaskell leveling the match at 18-18 late.

Hull looked in control at halfway after attempts by Adam Swift and Darnell McIntosh, with Matty Ashurst responding.

They might still have won if Luke Gale hadn’t missed two goal attempts.

Injury to playmaker Jake Connor was a second-half blow for the visitors, but both Wakefield lost key personnel in the form of Reece Lyne early on, forcing a rearrangement for Willie Poching’s side.

Victory comes as a major relief for the home fans, players and, in particular, head coach Poching, especially as teams around them at the bottom end of the table – such as Leeds and Salford – have shown signs of improvement in recent games.

Trinity now have a four-point buffer between themselves and lower side Toulouse, while Hull remain three points behind fourth-placed Huddersfield.

For Hull, it will once again raise questions about their ability to see games and deliver the consistency that has brought them victories over Wigan and Catalans in recent weeks.

While the home side struggled to make ends meet in the first half, as Brett Hodgson’s Black and Whites used their dominant pack and ball players Gale, Connor and Josh Reynolds to good effect, Miller’s pass Ashurst’s try gave them a chance.

Connor created plenty of chances for Hull, curling a pass to Swift for his first try and burning the ball for McIntosh to cross, but exploded in the second half for a long period with no points.

The rejig at the back seemed to affect Hull’s organization defensively as Hall punished a mistake for his attempt and Gaskell took advantage of the chaos to walk through with the humus threatening.

Miller, who once kicked almost halfway down a drop goal for Trinity on Magic Weekend, succeeded where Hull’s Gale failed. It kicked off joyous scenes during a Jubilee weekend around Belle Vue.

“I’m not going to lie. It feels good. It’s a nuance of relief I guess, but sometimes you just need that as an indication that you’re on the right track with what we’re doing.

“Jake Connor and Luke Gale had some quality touches for them, and we had to return to serve with team effort. To show the fight right up until and after the end, talking to some of the players. We had so many chances to win, their defense was resolute, they constantly retaliated against us but we kept our composure and received our rewards.

“I would have taken 40-0 as well, but the way of winning and the way of acting, the courage shown to finish like they did, it shows a lot about where we are still and what we have. In us.”

“It’s a terrible way to lose, I think at halftime we should have done enough to win, so it’s really disappointing. There were some of those this year that are frustrating. We were very poor in three games against teams that we should won, and in relation to Wakefield and where they are at the moment, 18-6 up at halftime we should close that game.

“Some events didn’t help, but we’ll look at that and make sure we get better. I’ll respect the referee but I don’t think we got any calls today and we had to do too. A lot of defense, which meant we couldn’t ask enough. questions offensively.

“Too many times late in the half in the second, we kicked early when we should have reached the last play and kicked into the corners and actually controlled that part of the game. Then we had two shots at a field goal that could. Crossed for us. . “