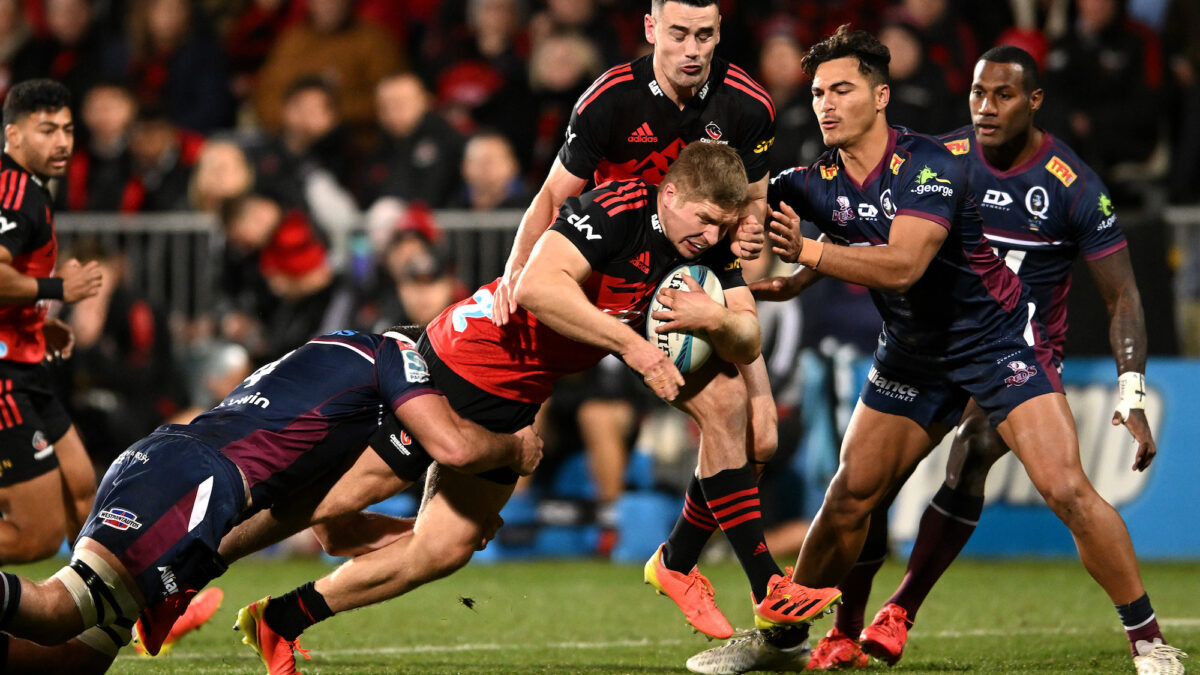 It has been pointed out to the contrary that having eight teams qualify for the final of a 12-team competition is a farce.

And with the top four seeds regularly confirming their place in next week’s semi-finals, a common cry through social media was “we told you why bother?”

In value, their premise is correct. Finals should be reserved for winning teams that have a genuine shot at the title, not too-runs with a 4-10 season record, with half of those wins against competition rookies.

But for other – more important – reasons, the premise is wrong. Rugby in this corner of the world is walking a commercial cliff. When broadcast partners require a full week of quarterfinals, it’s an easy decision to make. Abrupt, one might say.

And despite the predictable results – clear wins to the top three seeds, and a dogfight between sides four and five – a quarter-final weekend delivered tremendous value, including an opportunity for fans to see which players could make the move up to the higher level of. intensity that endings invariably bring.

To that end, players such as Tom Hooper of the Brumbies, Stephen Perofeta of the Blues and Folau Fakatava of the Highlanders have made significant strides. Each of them were already good players, but prospered when placed under a more intense spot.

Scoreboards can be misleading at times. The Reds, 37-15 losers to the Crusaders, were far more combative and competitive than in their 28-15 loss to the same team the week before. 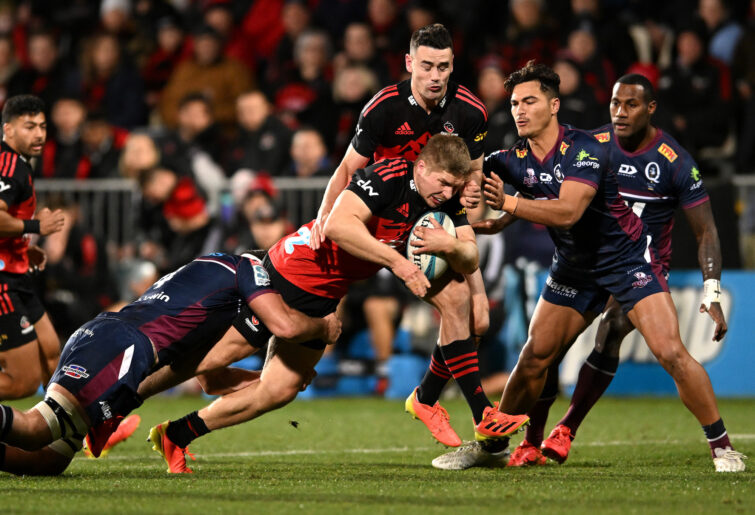 This was despite their melee being monstrous in the first 50 minutes, skill errors and inability to traverse the winning line meaning they were unable to control possession over multiple phases, and put fairly coordinated pressure on their hosts.

But there were promising shoots, greener than all seen in the last six weeks. Reward came with two sharp tries to their wingers, and while the Reds ’season has been on a slip since their win against Brumbies in Round 7, captain Liam Wright was right to say later that there was something worthwhile to take forward in the away. -season.

The Crusaders ’first-half dominance was built around their ability to recycle at warp speed, so fast that the attempt on Will Jordan was a situation where it was virtually impossible for the Reds (or any) defense to restore and stop.

As the dust settled on Friday night it formed as a bad weekend for All Blacks coach Ian Foster, with the stunning Ethan Blackadder suffering a serious shoulder injury, and Blues captain Dalton Papalii being excluded from rugby for an unspecified time.

By Saturday morning, it was confirmed that Papalii was suffering from appendicitis; no fun for him, but no such thing as keeping him out for long.

And Foster’s All Blacks loose front shares were further strengthened by Luke Jacobson tormenting the Waratahs, carrying hard, as if he were demanding a pick for the All Blacks’ upcoming series against Ireland.

With Jacobson leading the leaders across and across the goal line, those post-contact meters paved the way for a comfortable 39-15 victory.

Having beaten the Crusaders already this season, the Chiefs will go to Christchurch without fear. Perhaps their biggest job this week will be Quinn Tupaea, who learns that rubbing an opponent’s head after a test achieves nothing more than marking you as a headache.

Much of what the Waratahs did was good. Very good. Sam Harris scrambling 60 yards at full speed for an exciting transition attempt was great. That was the breakthrough for Dylan Pietsch. 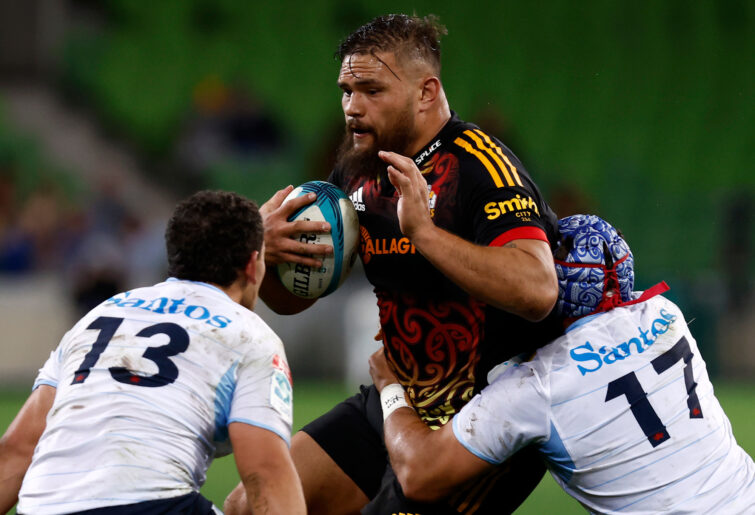 But too much of what they did was less than good. Poor thing, even. A naive attempt to run the ball out of their goal line in the first half gave a try. There were 14 handling errors, many of which were optional. They granted the collision zone. Tane Edmed’s goal kick was capricious.

None of that takes away from what has been widely hailed as a great season. Giant steps have been taken and it seems that there is now a strong base from which to go to the next level.

Darren Coleman, Jed Holloway, Jake Gordon, Angus Bell, Izaia Perese and Michael Hooper are all important, top names, with many others just a beard under them, constantly improving.

In Auckland, the Highlanders were ready for battle in the first quarter, adapting more quickly to the slippery Eden Park surface, and putting heavy pressure on the Blues’ melee, though never really convincing that they had the back power or finesse to to do. it hurt on the scoreboard.

The Blues remained calm and looked to have broken the game with a try to Akira Ioane, but his push for the line was enough just to provide TMO James Leckie with the opportunity to show his interpretation of the term “decisive proof”.

Perhaps Leckie’s attention was diverted, picking up Highlanders hooker Andrew Makalio in the prelude carelessly throwing his shoulder at Tom Robinson, leaving referee Angus Gardner with no option but to send him away.

Oddly enough, Makalia seemed to find the whole thing funny. It is doubtful that his coach Tony Brown also enjoyed the joke.

Better fun had Josh Dickson pull out the most outrageous of robberies from the back of a menacing Blusa maul. But, at half-time, the Blues finally produced space for Ioane, this time offering decisive proof of base, even if his post-rehearsal party was soaked.

Beauden Barrett cut through the same channel minutes later, and the Blues were suddenly ahead by 14-6, and on their way. 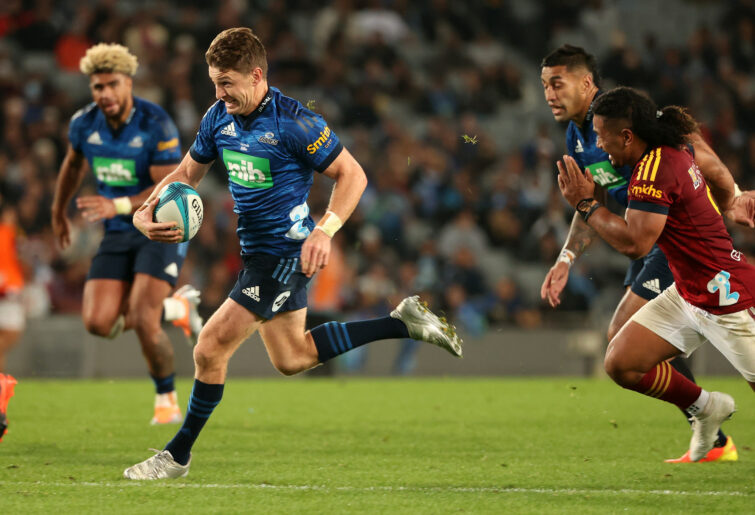 In other loose previous news of interest to Ian Foster, the individual battle between Hoskins Sotutu and Marino Mikaele-Tu’u was worth the price of recognition on its own. Ioane grew more and more dominant as the match went on, and after a long stint on the sidelines, Shannon Frizell returned from the bench looking hungry and strong.

The final score of 35-6 felt right, but the Blues will know they are facing a much different style of match next weekend.

They’re a side that likes to impose their attacking style on the opposition, but if they try to do so without first fighting the heat the Brumbies will bring to the collapse, they’ll be on a hot night.

Debate has raged long and hard in New Zealand over the suitability of Rieko Ioane for center, against his undoubted appeal as a winger.

Let the record state that Ioane threw the last pass for three of the Blues’ trials, each of them a mini-masterpiece in its ability to recognize where the space was and pass before contact.

Simple maybe, but just look simple because of Ioane’s speed and gentle touch. Coming in the same weekend when Jack Goodhue found himself out of position against Jordan Petaia and unable to make up for lost ground, Ioane looks sure to start against Ireland with 13 on his back.

The icy, polar explosion formerly known as winter made a hostile Canberra welcome for the Hurricanes, which defied the conditions by showcasing outstanding use and ball holding.

Unfortunately, matches are not won on those measures alone, and even when the impressive Josh Moorby phantomed through a gap for a well-deserved seven-point halftime lead, it didn’t feel enough.

After being touched last week, and given another reminder at the break, the Brumbies raised their intensity, threw hard at the breakdown, and fed their reliable maul. 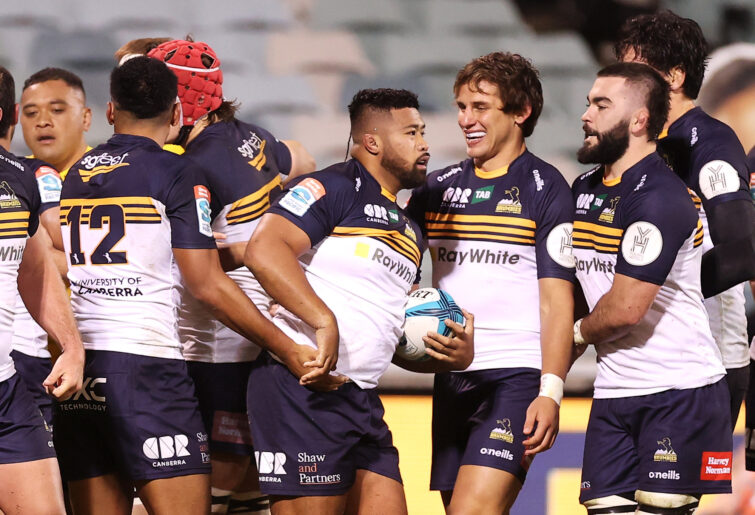 This was Brumbies DNA under Dan McKellar written great, and another reminder for Ireland – as if they needed it – that the best way to stop New Zealand sides playing you outside the park is to be abrasive and get in the nose.

The Brumbies drew energy from Tom Hooper’s efforts, then from his bench. Nick Frost, Lachlan Lonergan and Ollie Sapsford were all outstanding in Tom Banks’ try in the 64th minute.

By contrast, there was a feeling that Hurricanes coach Jason Holland had emptied his bench too soon, and while coaches like to spruce up the line that all 23 squad members are equal, in an elimination final you need your best players on the park when the championship. minutes are ready.

A few minutes of card madness in the first half bought the usual outrage and frustration. Len Ikitau saw red and Owen Franks yellow for high contact on Aidan Morgan and Noah Lolesio respectively.

No two circumstances are ever identical, but the Canberra crowd’s concern at the apparent inconsistency was understandable.

Striving for the consistency that everyone is asking for, World Rugby has chosen to use a starting point of contact as the main determinant of further action.

Therefore, objective process and frameworks are important, otherwise subjectivity and the atmosphere take over. And with each individual having a different sense of what that atmosphere is, confusion and disagreement would be rampant.

The current decision-making process is so useful to an extent, but it contains two major shortcomings. First, it requires referees to determine the point of contact on a field, working with low-definition stadium screens, often taking into account single dimensions.

In these situations, it’s easy to be overly influenced by the sight of a player’s head clicking back – often due to the physique of momentum as opposed to actual direct, strong contact to the head.

Second, an overly rigid decision-making framework may be dominated by simple logic, and does not provide for an arbitrator to apply a common-sense application.

Nowhere was this better illustrated last week, with the uproar over Pablo Matera escaping suspension due to his advisory gear on Jordan Petaia, while Sam Gilbert of the Highlanders sits down for five weeks for his advice on Michael Hooper. 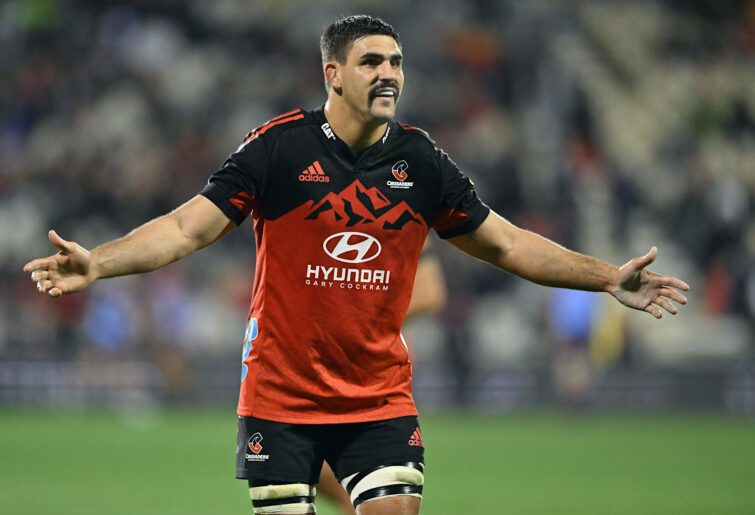 The respective arbitrators were 100 percent correct in their law enforcement with respect to the point of contact, but any logical reading indicates that the variation in the sanctions is meaningless.

In this weekend’s events, Frank was able to consider himself lucky, based on a marginal determination that initial contact had been made with Lolesio’s shoulder, in front of his head.

Conversely, Ikitau may consider himself unlucky that the same determination was not made for him when – based on a number of angles – there was a strong argument for initial contact being with Morgan’s shoulder.

If it all sounds like it and it feels like hair is split, it’s because they are. A much fairer solution is to keep full red cards for obvious, serious cases of bad play.

But where there is any doubt, apply a yellow card and send those cases to the court for a more sober, detailed analysis, using higher quality audio-visual equipment than the referee has at his disposal during a match.

All supported by more severe suspensions, if and when players are found guilty, in order to maintain the effective deterrent effect.

All in all, these arguments and points of discussion around relativity and precise points of contact are on the sidelines, and not the real issue. Minimize contact to the head is.

And the quickest and easiest solution is for players to learn not to come into contact in an upright position and control their actions.

No coach wants to be the first to insist on unplugging his players and undoing everything they’ve learned, having them all tackle low, only to be embarrassed when his side is torn apart by opposition having a field day unloading at will.

But they could just as well bite the bullet and go on, rather than die from a thousand cuts. They will all do it soon enough.